To date, Yamashita has published four novels, all critically-acclaimed. Yamashita’s first two novels, Through the Arc of the Rain Forest (1990) and Brazil-Maru (1992), take place in Brazil and are influenced by her life and research there. Arc is a story of environmental destruction in the rainforest, while the Brazil-Maru explores the lives of early twentieth century Japanese immigrants in Brazil. Both Arc and Brazil-Maru have been translated into Japanese, and Arc was also published in Portuguese translation under the title Matacão, uma lenda tropical (2003).

Yamashita’s next novel, Tropic of Orange (1997),is set in Los Angeles and Mexico and follows a diverse cast of characters in an unsettled future where the Tropic of Cancer is moving northwards. Yamashita’s most recent novel, I Hotel (2010), is an extensively-researched exploration of the Asian American Movement in the San Francisco Bay Area from the 1960s to the 1970s, told through ten distinct yet interrelated novellas. 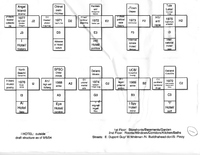 Early draft of the structure of I Hotel 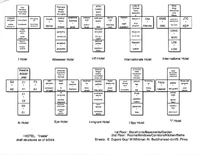