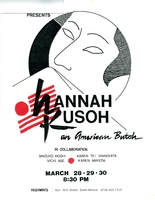 Karen Tei Yamashita has written and co-written numerous performance pieces, some of which have been collected in Anime Wong: Fictions of Performance (2014). Yamashita’s dramatic work spans her career, from her time in Brazil in the mid-1970s through to the present. While covering a number of different subjects, much of her dramatic work is experimental, using music, dance, videoclips, and imaginative sets and costumes to playfully explore race and gender with attention to the collaborative nature of performance.

Among Yamashita’s many dramatic works, both theatrical and musical, are Omen: An American Kabuki (1978), Hannah Kusoh: An American Butoh (1989), Tokyo Carmen vs. L.A. Carmen: A Performance Collaboration (1990), and Noh Bozos: A Circus Performance in Ten Amazing Acts (1993). Many of these were performed around Los Angeles in the 1980s and 1990s. Later works include Anime Wong: A Cyberasian Odyssey (2008) and Jan Ken Pon: A Dance Performance Idea (2012).

Along with scripts, items such as props, photographs, and costumes can be found in the Karen Tei Yamashita papers.