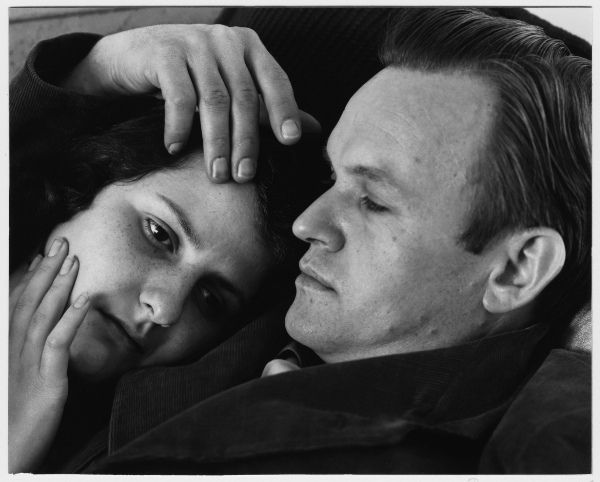 Ruth-Marion Baruch and Pirkle Jones. Photo by Rose Mandel. circa 1946

RUTH-MARION BARUCH (June 15, 1922-October 11, 1997) was a documentary photographer, poet, and educator who was born in Berlin, Germany. She immigrated to the United States with her parents in 1927 and spent her childhood in New York City. When she was fourteen, Baruch wrote and staged her first play at New York City's Temple Emanu-El entitled Middle Ages Returning. In 1944, she earned a Bachelor of Arts degree in creative writing and literary criticism as well as a Bachelor of Journalism, both from University of Missouri. In 1946, she became the first recipient of a Master’s in Fine Arts degree in photography from the University of Ohio. She wrote her thesis on photographer Edward Weston, under whom she apprenticed and with whom she became friends after relocating to California. The thesis was titled "Edward Weston: The Man, the Artist, and the Photographer". After completing her graduate studies, Baruch relocated to San Francisco and began post-graduate studies in photography at the newly inaugurated fine art photography program founded by Ansel Adams at the California School of Fine Arts (CSFA), now the San Francisco Art Institute (SFAI). While at CSFA, Baruch met fellow photographer Pirkle Jones who she married in 1949. Baruch and Jones lived in San Francisco for twenty years before moving in 1965 to their Mill Valley home designed by West Coast modernist architect Henry Schubart.

PIRKLE JONES (January 2, 1914-March 15, 2009) was an award-winning documentary photographer and educator who was born in Shreveport, Louisiana. His family moved to Lima, Ohio where, at age seventeen, Jones purchased his first camera, a Kodak Brownie. Throughout the 1930s, after graduating high school, he began exhibiting and publishing his works in pictorial salons and regional camera clubs. From 1941 to 1946, Jones served in the United States Army as a Warrant Officer in the Signal Corp of the 37th Infantry Division; while enlisted, Jones discontinued his photographic practice.

Upon his discharge, he took advantage of the G.I. Bill to pursue photographic studies at the newly inaugurated fine art photography program at California School of Fine Arts (CSFA) in San Francisco, California, which was renamed the San Francisco Art Institute (SFAI) in 1961. There he studied under some of the most renowned photographers in the United States, including the program’s founder and first director Ansel Adams, Imogen Cunningham, Dorothea Lange, Edward Weston, and Minor White who served as the program’s second director and principal instructor.
From 1947 to 1951, Jones served as Adams’ assistant and was instrumental in the preparation of Adams’Portfolio I: Twelve Photographic Prints (1948) and Portfolio II: The National Parks and Monuments (1950). During this time, he also collaborated with Minor White and Al Gay on an unpublished project documenting the architectural work of Bernard Maybeck. In 1949, after graduating from the CSFA, Jones married his classmate Ruth-Marion Baruch, launching a forty-nine-year romantic and creative partnership. Together they documented some of the San Francisco Bay Area’s momentous cultural events of the late 1960s, notably the Black Power movement. They lived in San Francisco for twenty years, until 1965, before moving to their Mill Valley home which was designed by renowned West Coast modernist architect Henry Schubart.