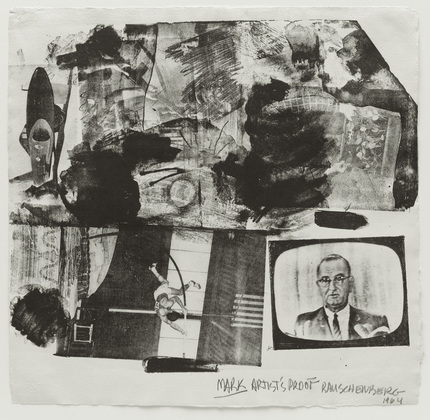 Rauschenberg’s XXXIV Drawings for Dante’s Inferno, were executed in 1959 and 1960. The clam-shell box consists of 34 lithographs on single ply paper. Rauschenberg’s point of departure is the John Ciardi translation of Dante’s “Inferno” published in 1954. This colloquial version was highly circulated at the time and presents the Dante’s prose in a detailed an easy-to-understand language. In this sense Rauschenberg’s book is directed towards an audience that would both have knowledge of his own work and the work of Ciardi’s “Inferno”.

Rauschenberg presents his lithographs separated from Dante’s poem, rather including each illustration within a paper folder with the correlating Canto of each “Inferno” illustration. To create the series of lithographs Rauschenberg used combine, transfer and collage techniques with a variety of mediums including colored pencil, crayon, gauche, watercolor, wash and pencil. The final “illustrations” are lithographs of Rauschenberg’s drawings, rather than the drawings themselves.

As an allegory Dante’s poem is prescient to who ever takes up the task of visually articulating his prose. As is such Robert Rauschenberg’s interpretations are alive to meanings particular to his time and place. Rauschenberg incorporates contemporaneous visual culture to make the “Inferno” specific to his zeitgeist. Rauschenberg chose to only depict “Inferno” which may suggest his particular historical perspective. “As a closeted gay man in that homophobic decade…Rauschenberg knew that sexual love and damnation were indissolubly intertwined: No Beatrice was going to lead him to salvation. So Hell was what he chose to depict…” Rauschenberg focuses on the Inferno to inform its audiences that salvation is for the few. 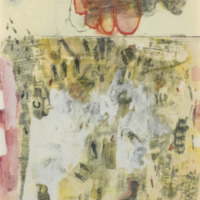 In Canto XIV Dante enters the final round of circle 7, which incorporates all violence, outside of physical violence, against others and us. That means all violence against “good”. Dante’s notion is that the universe is structured toward a particular teleological “good”, and those who act outside of this structured order commit violence against it. In this circle Dante comes across naked sinners doomed to walk across burning hot sand for eternity. Here, in his depiction of Canto XIV, Rauschenberg traces the outline of his own foot in red crayon at the top of the lithograph. 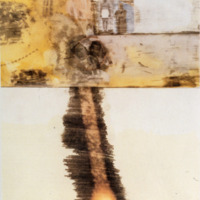 “Canto 16 opens with the ‘rumbling drive of the waterfall…a murmur like the throbbing of a hive,’ The roar is again suggested in the thickly scribbled pencil lines, and the hint, in the last part of the canto of something astonishing to come is contained in the bulb of the waterfall-qua-pendulum-qua-thermometer figure.” 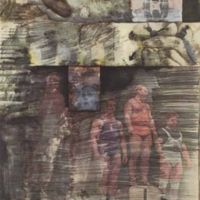 The Poets, following the sound of a loud horn, are led by it to the ninth circle, in which there are four rounds, one enclosed within the other, but Canto XXXI shows only that the circle that is encompassed with Giants, one of whom, Antaeus, takes both Dante and Virgil in his arms and places them at the bottom of the circle. 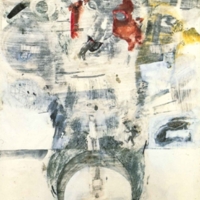 “Each sinner swathes himself in his own torment” 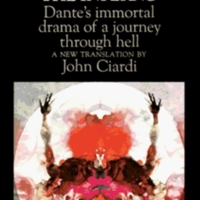 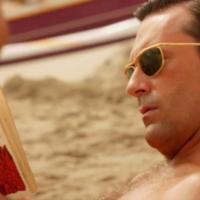 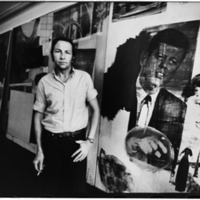 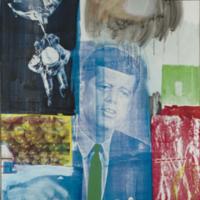