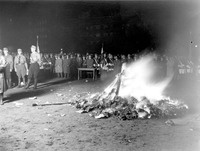 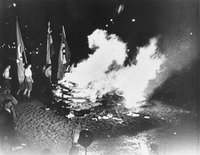 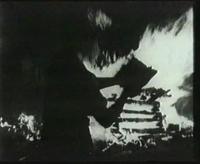 May 10, 1933 - German students from universities gather in Berlin and other German cities to burn books with "unGerman" ideas. Books by Freud, Einstein, Thomas Mann, Jack London, H.G. Wells and many others go up in flames as they give the Nazi salute. The speech and book burning were accompanied by the singing of Nazi songs and anthems. Nazi Propaganda Minister Joseph Goebbels gave a speech to the students, stating:

"The future German man will not just be a man of books, but a man of character...you do well in this midnight hour to commit to the flames the evil spirit of the past. This is a strong, great and symbolic deed - a deed which should document the following for the world to know - Here the intellectual foundation of the November (Democratic) Republic is sinking to the ground, but from this wreckage the phoenix of a new spirit will triumphantly rise..."

The Library of Alexandria was one of the largest and most significant libraries fo the ancient world. Famous for having been burned, the library may have suffered several fires or acts of destruction, of varying degrees, over many years. Ancient and modern sources identify four possible occasions for the partial or complete destruction of the Library of Alexandria: Julius Caesar's fire during his civil was in 48 BC; the attack of Aurelian in AD 270 – 275; the decree of Coptic Pope Theophilus in 391 AD; and the Muslim conquest of Egypt in (or after) AD 642.

Cleopatra: Oh I see Romans only start fires, is that it? […] Use that Roman genius for destruction, tare down cities, wipe down pyramids.  How dare you and the rest of your barbarians set fire to my library? Play conqueror all you want mighty Caesar, rape, murder, pillage thousands millions of human beings, but neither you nor any other barbarian has the right to destroy one human thought. 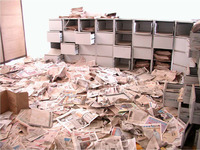 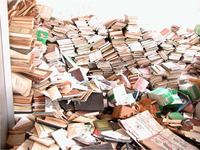 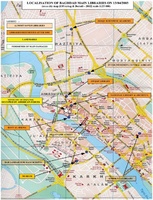 In April of 2003, the National Library and Archives (Dar al-Kutub wa al-Watha’Iq), was located directly across from the Ministry of Defense, had been burned and looted. Taking place on two occasions: April 10 and April 12–13. These fires were set professionally with accelerants. A report was later given by Saad Eskander, the director–general of the National Library and Archive, regarding the destruction. He noted that three days before the invasion, library staff were told to destroy all archival material related to the Ba’athist rule. Eskander also reported that the destruction was performed by “a mix of poor people looking for a quick profit, along with regime loyalists intent on destroying evidence of atrocities”.