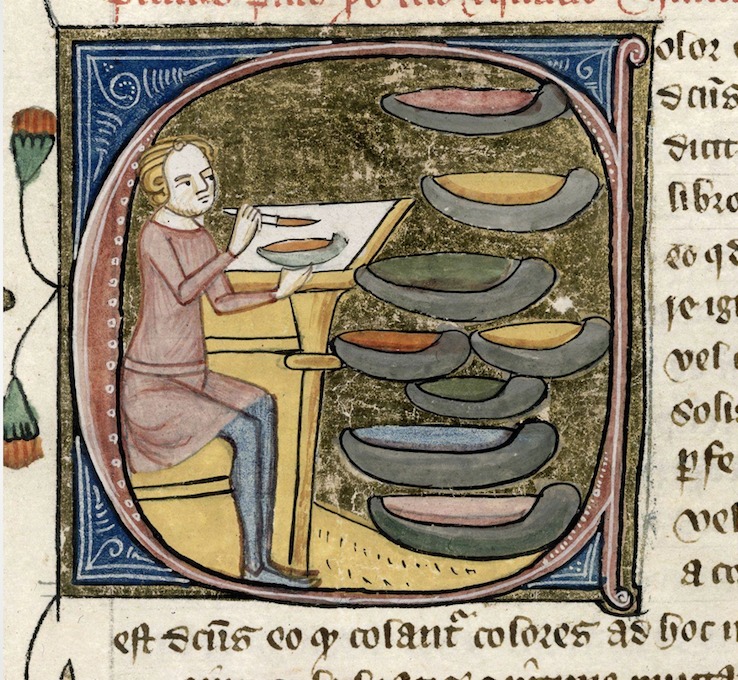 Books were made by hand on parchment and eventually on paper for over a thousand years during the Middle Ages.  Parchment was a valuable commodity: its preparation entailed a long and messy set of steps. Once the parchment was ruled with ink, dry point or lead, scribes could begin the process writing the text and preparing the pages for illustrations.  Scribes wrote with quills made from feathers. They are much more responsive to movements of the hand than today’s pens. They are held loosely so that it is possible to slide the quill through one’s fingers. Contrary to popular belief, scribes very rarely kept the plumage attached to the quills because it got in the way of their writing. Examples of feather quills can be seen in case 5 in the Special Collections reading room. The use of ink goes back to the time of the Egyptians who created carbon ink by scraping soot from cooking pots and mixing it with a weak solution of gum. This carbon ink recipe was used by the Greeks and Romans and throughout the Middle Ages. Another ink commonly used by medieval scribes was metallic ink made from organic iron salts, oak galls and gum Arabic. Metallic inks are black or gray in color, and with time fade to brown or even yellow. After the 8th century, scribes preferred to use iron gall ink instead of carbon. Red ink was used in medieval manuscripts for headings, titles, initials and for marking “red letter” days in calendars. It was sometimes used for corrections to show how carefully a text had been checked. Gold or silver ink was used in some luxury manuscripts.

Students in the seminar prepared a variety of presentations on aspects of manuscript production during the course of the quarter. Below are three examples that describe parchment preparation (Blake Laughter), gilding (Gabriela Espinal) and bookbinding (Kelsey Lewis).