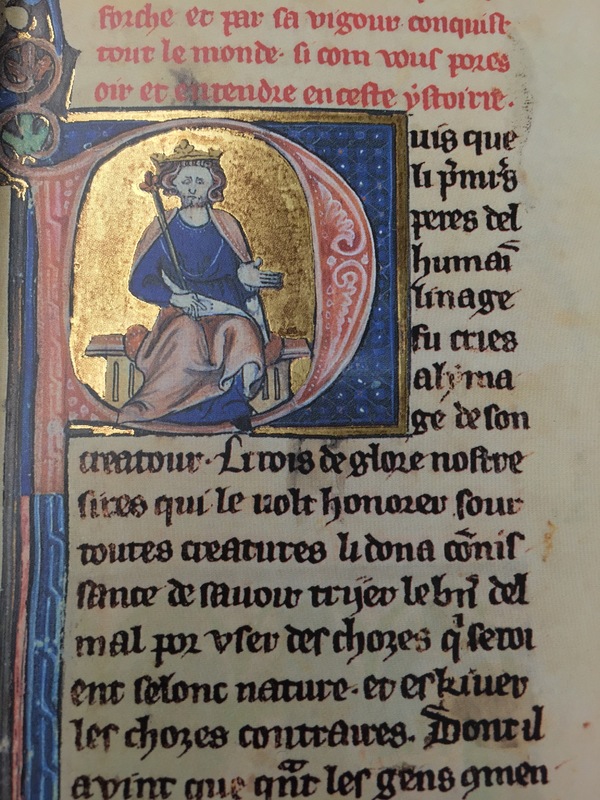 During the Middle Ages, Alexander the Great’s life was the subject of numerous verses and prose accounts in Latin. The L’ystoire du bon roi Alixandre was produced in the late 13th century and exemplifies a finished manuscript involving antiquity and the marvels associated with Alexander the Great. This manuscript is a translation from the Latin, “Historia de Preliis Alexandri Magni,” which was drafted in the region of Hainaut immediately before multiple manuscripts were produced in the 1290s. There are four fully illuminated manuscripts based on this translation and all of them were produced by a craftsmen in northern France; each version contains the majority of the same illustrations though there are a handful designated only to particular versions. The format of this particular manuscript (and sister manuscripts) places Alexander’s story in both Biblical and dynastic contexts, further encouraging a historical relevance greater than just a collection of merveilles (or marvels). Modifications include shortening the written account of Alexander’s marvels and an edited account of his time in India, with the narrative well-suited to the contemporaneous French aristocracy. For example, Alexander became a knight in this manuscript and the pagans were Christianized, allowing the stories to match the audience’s expectations of the time. The commissioner of such an expensive and richly illuminated manuscript was likely an aristocrat, who had the means and leisure to buy and enjoy such a work. Alexander was a fitting protagonist, already revered and categorized as one of the Nine Worthies, along with Hector, Julius Ceasar, Joshua, David, Judas Maccabeus, King Arthur, Charlemagne, and Godfrey of Bouillon. 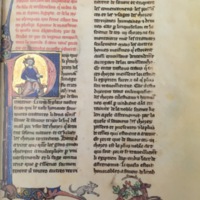 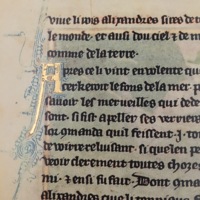 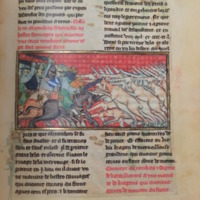 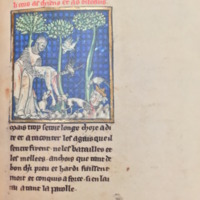 Explicit (Latin explicitus, meaning 'unrolled') designating the end of the manuscript. Featuring a single-column illumination of the body of Queen Olympias thrown to birds and beasts of prey. (f.82)

Folios 3v and 4r are displayed. In a full-page miniature featuring Alexander’s supposed father, Nectanebus King of Egypt, in his palace at the castle of Cairo hierarchically larger and grander than the surrounding scenes, the rivers and mills of Babylon are viewed below. Folio four portrays King Alexander enthroned within a page-encompassing historic initial P, showing Alexander within the letter. The rubric above, in red ink, separates and delineates the story from the heading. 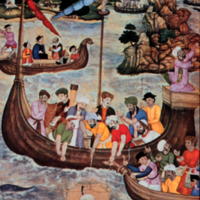 To provide cultural assimilation, Alexander the Great rendered in his submersible by 16th century Islamic artist. 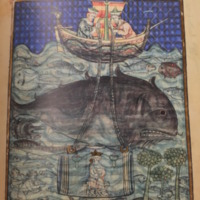 Alexander in a diving bell exploring the bottom of the sea. (f.67) 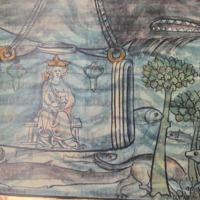 A close up of Alexander, allowing for the intricate details to be shown. (f.67)

Alexander the Great famously depicted in his bell jar, exploring the bottom of the sea. This particular feat. has been illuminated by numerous artists and is one of his more visually iconic legends. 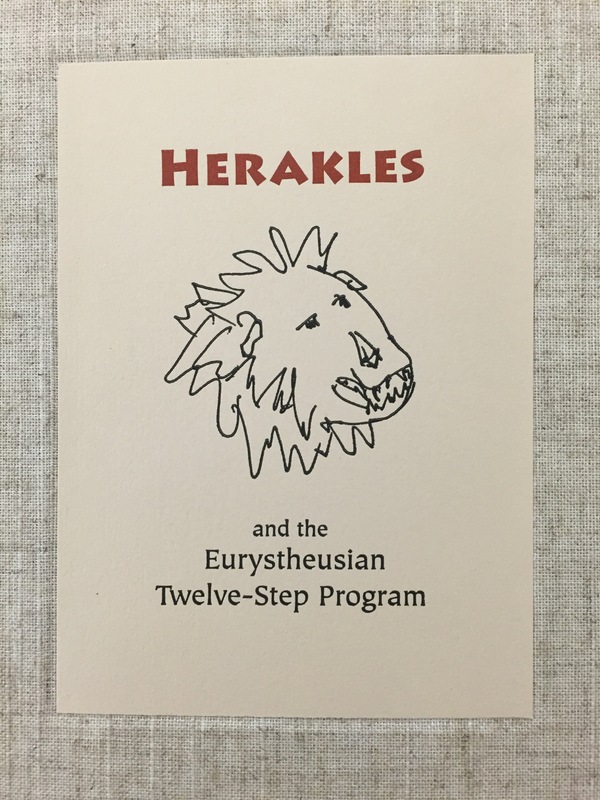 Herakles and the Eurythesian Twelve-Step Program

The concept of viewing and appreciating a book as a work of art has a long tradition in bookmaking cultures. With the rise of conceptual art in the 1960s, the relationship became more involved and resulted in the modern concept of the artist book. A contemporary example bridging antiquity and legend in a format for the modern-age is Herakles and the Eurythesian Twelve-Step Program published by Foolscap Press, a local publishing company in Santa Cruz. This humorous and artistically nuanced book was written by Lawrence G. Van Velzer and illustrated by Peggy Gotthold.  My edition of this 51-page book is fourth of one hundred. The book also has a companion feature, a 55-minute shadow-puppet endeavor reminiscent of classic Greek theatre.

The style of this artist book is highly individualistic. The short story is told through sensible articulation in a linear story-like progression, and its subtle attributes are clearly recognized upon exploring the book in a more playful manner. The story parodies the twelve labors of Herakles and conflates them gently with the 12 step-program (Alcoholics Anonymous). The story is told from the perspective and dialogue of Herakles and Eurystheus, detailing his Twelve Labors in 12 chapters. Excluding in the introduction and conclusion, each chapter is split in two literal portions, the former with Herakles uniquely addressing Eurystheus and describing the success of each labor, the latter of each chapter is sanctioned for Eurystheus to delightfully tell Herakles of his next labor, usually in hopes of inciting his sense of impending doom. Humor is plentiful throughout the book, for example the dynamic development of Eurystheus and Herakles eventually becoming friendly associates at the book’s conclusion after continuous adversary. 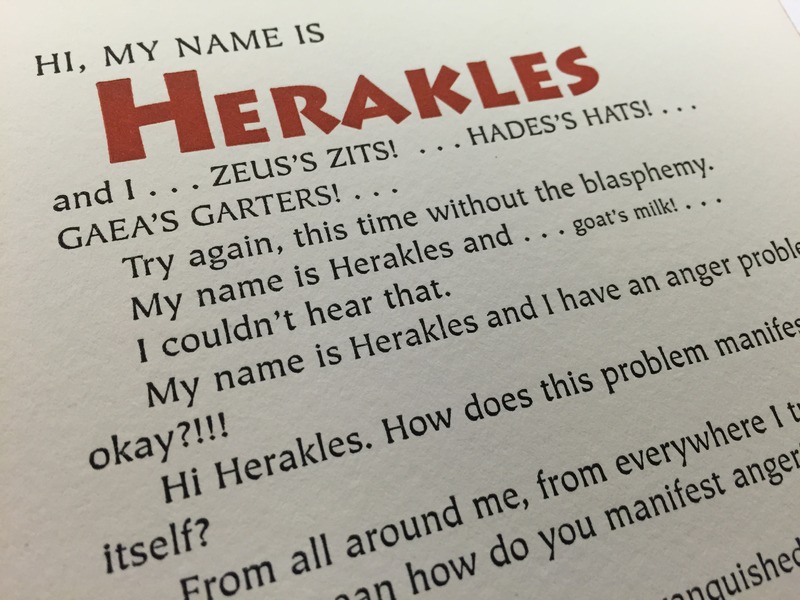 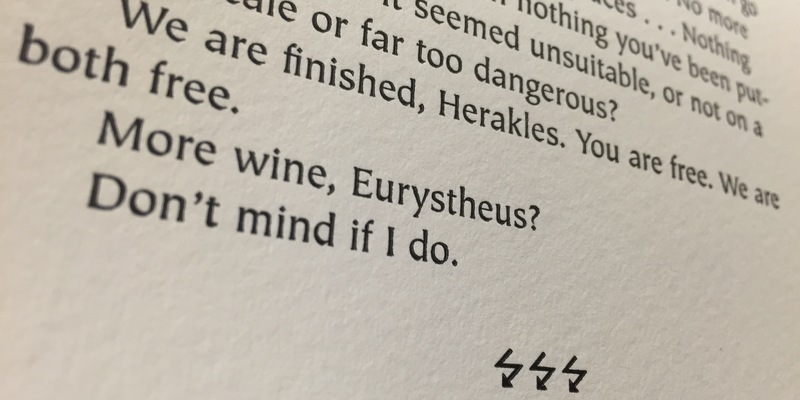 The book is printed on textured paper in black text, the title “Herakles” is given a special treatment with bold red font in Greek stylization. Each chapter is three to four pages in length with illustrations between each chapter, showing a rendering of each particular labor on a Greek vase. The style of each illustration is a continuous contour-line drawing. A unique feature of this book is that each chapter has the ability to fold out or “unstack” so the pages can spiral outwards, when the book is standing on its bind and fully opened, the pages emanate from the book in a spiral design, resembling of the sun. Though an ideal and playful way to deploy this book for viewing, the actual essence of humor is majoritively found through the sharp text conversation between Herakles and Eurystheus and reinforced through the illustrations. As a result, the final page of the book is open to display both of this accentuations, as well as the colophon (a statement of information regarding the books production), which integrates Herakles essentially linking the antiquity of his legend with the history of book production. Similarly, this artist book serves as a catalogue of the labors (or steps) of Herakles, through illustration the viewer visually familiarizes and affirms the 12 labors:

Capturing the Golden Hind of Artemis.

Cleaning the Augean stables in a single day.

Stealing the Mares of Diomedes.

Obtaining the girdle of Hippolyta Queen of the Amazons.

Obtaining the cattle of the monster Geryon.

Stealing the apples of the Hesperides.

Capturing and bring back Cerebus. 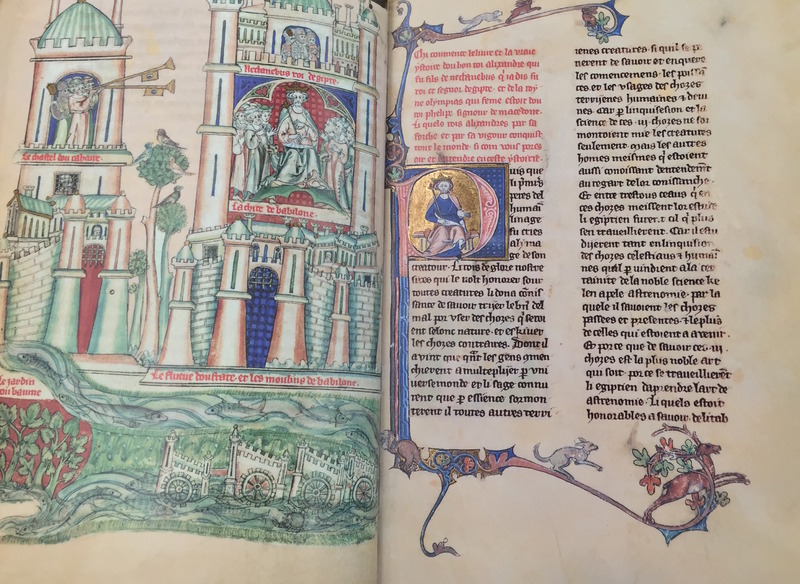 Herakles and the Eurythesian Twelve-Step Program

To compare and discuss the properties intrinsic of each of these books, a deeper exploration into the history of book production and the progression of cultural attitudes should be addressed. Though produced over seven hundred years apart and for dramatically different situations, both the artist book and the manuscript incorporate and embrace antiquity. The L’ystoire du bon roi Alixandre is multifaceted in antiquity, commissioned by and during religious dominance, the focal point centers around world dominance and the excitement dominance casts. In Herakles and the Eurythesian Twelve-Step Program, we reach into Greek mythology and introduce the characters with modern circumstances of familiarity. If the Alexander manuscript were open for display, I would exhibit the codex laying flat with folios 3r and 4 open to the audience, as there is an abundance of visual iconography and storytelling immediately apparent. The first folio introduces us to the initial full-page miniature in the manuscript, featuring an establishing shot of the narration with King Nectanebus of Egypt over his domain with Babylon and its rural landscape below; comparatively, the next folio depicts Alexander being enthroned. The initial full-page miniature is featured: a grand and singular historiated initial with vibrant golds and blues with animals on the fringes of the character seemingly running on to the next page for the story to commence. From a scholarly viewpoint, full-page miniatures from the late 13th century were generally reserved for liturgical books with most romance and epics portraying only columned miniatures; the involvement of the former in this Alexander romance adds perspective to secular manuscript production in this time.