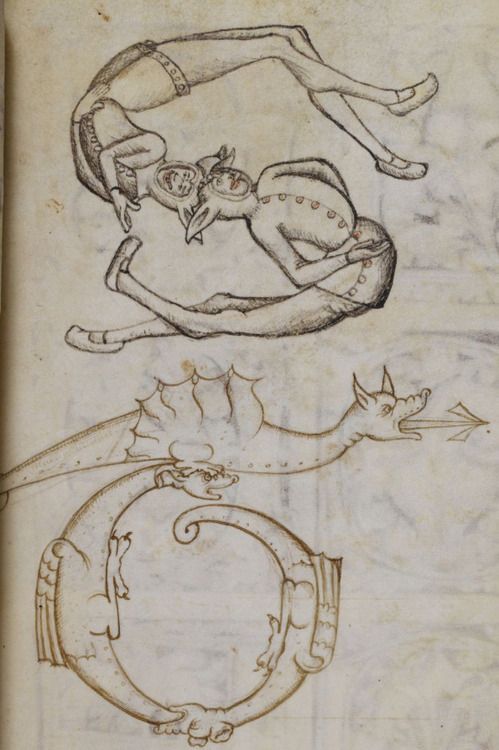 The Macclesfield Alphabet Book originated in England. There is still speculation as to how books like the Macclesfield Alphabet Book were used, but they may have been used by scribes and illuminators to learn scripts, copy scripts, or display their skills and new work to potential clients. In this manuscript, folio 6r shows the letters ‘N’ through ‘S.’ The letters are anthropomorphic and zoomorphic illuminated capitals embellished with pen flourish decoration and foliage patterns. Specifically, the ‘N’ is a man that resembles King Edward IV, who is represented by his crown, the ‘P’ is a man with a long chin and hat, and the ‘R’ shows a winged animal lying on the letter. The faces on folio 5v differ from the faces on folio 6r. On folio 5v, the crude expressions signify low status, while the composed facial expressions on folio 6r signify high status. Each set of facing pages within the Macclesfield Alphabet Book shows a different example of a particular script design that would traditionally be used in medieval manuscripts 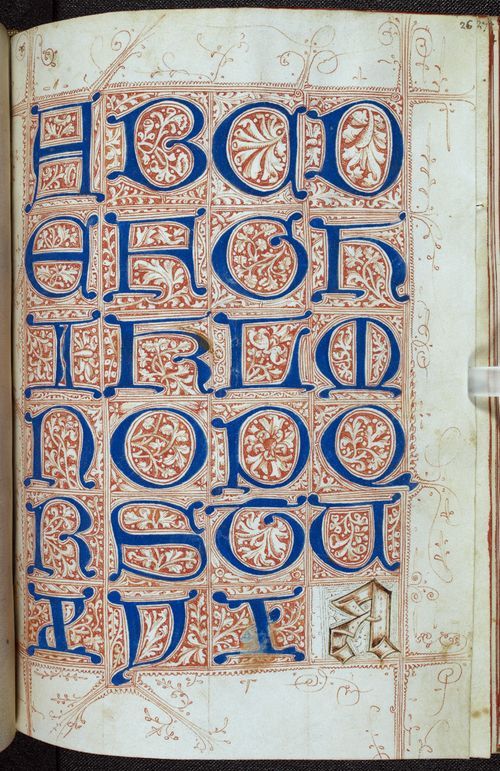 This is a Youtube video on the medieval alphabet, as decorated initial letters.

This folio showcases the alphabet of versal capitals with elaborate pen-work that are in blue ink with red penwork infill. The red-inked grid with blue ink alphabet has white foliage around the red ink should be used because it encompases what the book, or author, wants to convey/present. This is one of the only sets of the alphabet that is in colored ink. This is one of the only finished pages of the manuscript. This shows the helpfulness and educational purposes that the manuscript offers. 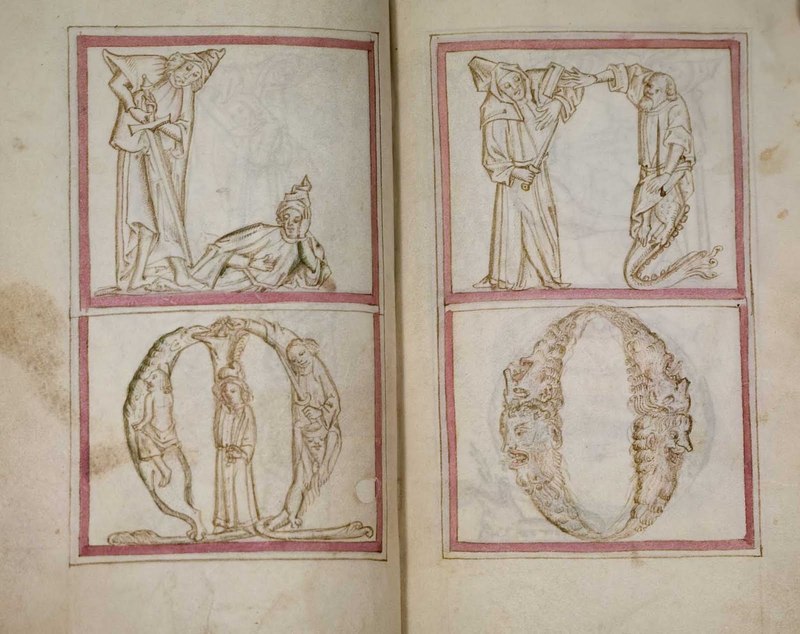 This folio has two letters on each side with full border dividing the two letters. Folio 17v has the letters ‘L’ and ‘M’ grotesques that displays human figures. The ‘L’ is a grotesque in a two man scene, with one man holding a sword downward. ‘M’ is a tree in the middle that is in the back of a young woman while the right side/curve of the letter is a man with a sword and underneath is an unknown (male or animal) figure. The left curve/side of the letter shows a nude man covered by a cloth riding a griffin. The two figures on each side connect together to form the letter ‘M'.

These letters shown show a full figural integration of human interactions and events in the shape of that letter. There are different events and figures that give you a wide sense of the ideology, oral history/traditions, and stories that surround biblical imagery and allusions. 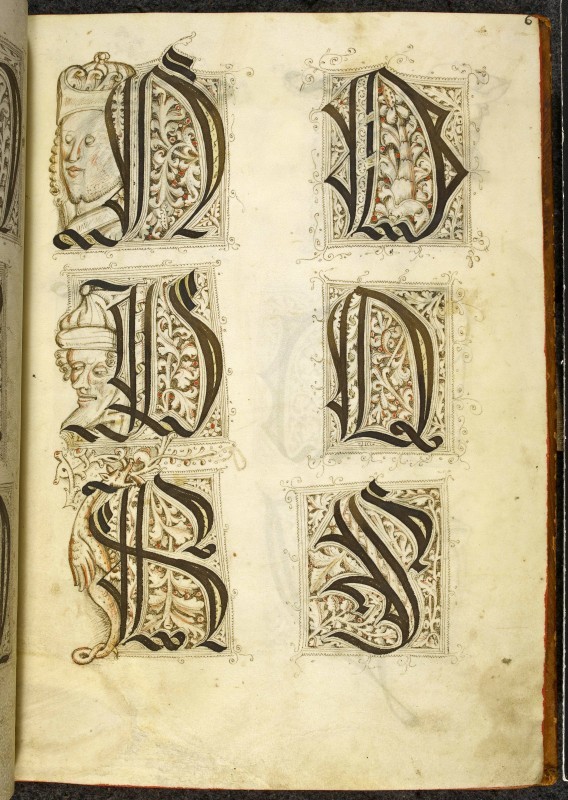 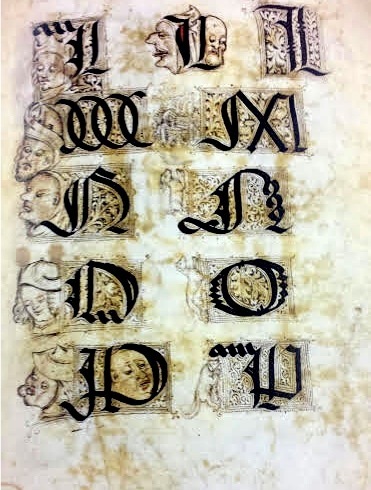 Folio 6r showcases figural and scriptical elements that it produces which emulate thoughts to the audience. This shows the letters ‘N’ through ‘S.’ The letters are anthropomorphic and zoomorphic illuminated capitals embellished with pen flourish decoration and foliage patterns. Specifically, the ‘N’ is a man that resembles King Edward IV, who is represented by his crown, the ‘P’ is a man with a long chin and hat, and the ‘R’ shows a winged animal lying on the letter (Hamel). The right side, ‘O’, ‘Q’, and ‘S’ have the same design as the left side but without the figural element.

On Folio 4r shows the calligraphic initals, 'L' through 'P' with pen flourishes and foliage deocr with anthropormorphic figures such as everyday poeple and animals. The human on the letter 'L' represents Edward IV's rival in the War of the Roses. The faces on folio 4r differ from the faces on folio 6r. On folio 4r, the crude expressions signify low status, while the composed facial expressions on folio 6r signify high status.

Birds, animals or dragon letters, seen on both pages, are usually drawn at the opening of medieval charters, but were reserved for the lowest level in the hierarchy of decoration in medival church choirbooks, especially in the Netherlands or England.

On the history on the War of the Roses:

War of the Roses 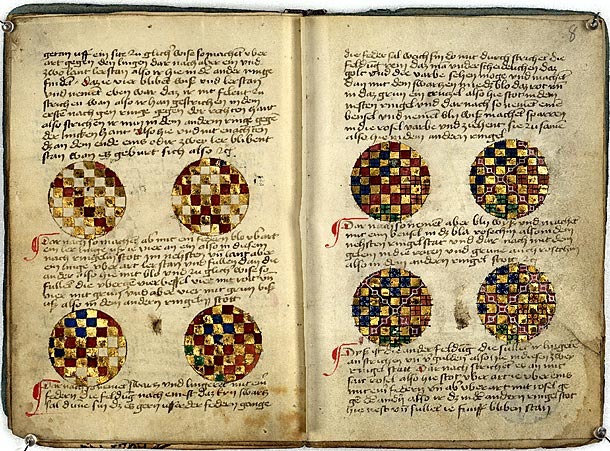 The Gottingen Model Book is an instructional manuscript meant for scribes and illuminators who are learning how to design a text. Model books contain both verbal instructions and pictorial guides that explain the production of decorative illumination in successive steps. For example, a model book might contain anything from how to create gold pigment to how to layout a page. Folios 7v-8r of the Gottingen Model Book display instructions on how to create a patterned background. The pages consist of paragraphs of written instruction followed by a corresponding detailed image. Patterns like this were used by artists for over 200 years. There is evidence that the models and motifs in the Gottingen Model Book were used in at least thirteen manuscripts, including a hand-illuminated version of the Gutenberg Bible. Model books remain an important resource for artists and scholars. 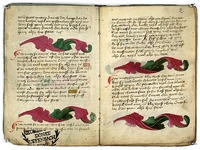 For scribes and illuminators, there were fears that the traditional craft book of illumination was threatened by printing, therefore the practitioners were wary of this art form being non-existent. From these worries became a creation of records of their teachings and practices. As well, they didn’t want their knowledge to go unnoticed/unheard.

Only until the 15th c. that we soon realize that the model books and instructional manuals play an important role in the Renaissance. As well the construction of letters, especially the Roman capitals, came around during the late 15th-16thc. due to this fear. 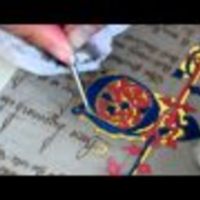