Books as Indicators of Geographical Presence and Cultural Values 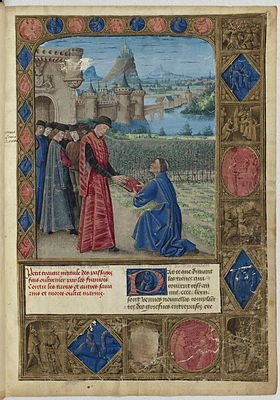 Les Passages d’Outremer, authored by Sébastien Mamerot, was written for Louis de Laval.  Laval was a French aristocrat, and advisor to King Louis XI.  Mamerot served as the chaplain and secretary to Laval.  The first illustration in Les Passages d’Outremer is a dedication page showing Mamerot kneeling, offering the book to Laval.  Louis de Laval, the Lord of Châtillon, from 1448-1457 served as the governor of Dauphine, he later became the lieutenant general, and then the governor of Champagne from 1465-1472.  An order of chivalry was founded by Louis XI in 1469 known as the “Order and amiable company of St. Michael”.  Laval was named a Knight of the Order of the King.  The writing of Les Passages d’Outremer began in 1472 and the manuscript was completed Tuesday April 19th 1474, a few days after Easter.  Les Passages d’Outremer was produced in the town of Vierzon, in present day central France.  Vierzon was a Catholic city located approximately 33 km from where the manuscript was illuminated and painted by Jean Colombe—a well-known 15th c. painter—to the south, in Bourges. Bourges during the 15th century was famed as a center for illumination. It is also the birthplace of King Louis XI.  1453 marked a definitive moment in the Hundred Year War, a series of conflicts between France and England; the whole region quickly fell to the victorious French. In July 1465, a decade before the manuscript was created; Louis XI was involved in the Battle of Montlhéry fighting the League of the Public Weal.  The Treaty of Péronne was later signed in 1468 by Charles the Bold, Duke of Burgundy and Louis XI.  There followed four years of peace. The year Mamerot began Les Passages d’Outremer the Duke of Burgundy, Charles the Bold, again took up arms against Louis XI.  The Treaty of Picquigny (1475) with Edward IV of England formally ended the Hundred Years' War.  The years in which Les Passages d’Outremer was written were very much affected by French engagement in war; the miniatures present in Les Passages d’Outremer reflect the war waging reality of 15th century France.  This manuscript was later owned by Diane de Poitiers (mistress of Henry II), and Cardinal Jules Mararin, and is now held at the Bibliotheque Nationale de France. 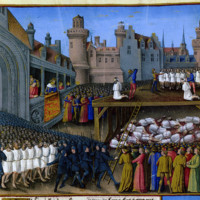 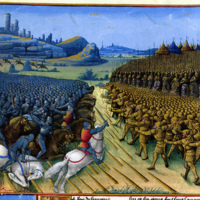 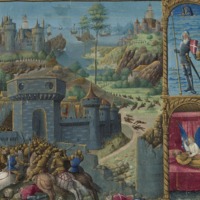 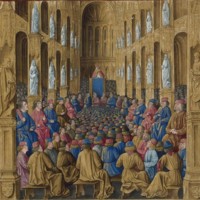 Les Passages d’Outremer is the only contemporary document to represent centuries of French crusades.  The 66 miniatures painted by Colombe depict expeditions, battles/ massacres, and burials; these juxtaposed mythical and historical scenes form a chronicle of the crusades that glorifies war and French authority.  This manuscript visually links the warring endeavors of French leaders with carrying out the will of God.  In one of the first few scenes in Les Passages d’Outremer there is a half-page miniature of the Capture of Jerusalem by the Saracens.  Smaller miniatures on the right side this page show the Dream of Constantine V.  At the top of the page Charlemagne is depicted in armor and with a red and white shield (fol.6r).  Another miniature shows Charlemagne and the envoys of Constantine V before Paris and the preparation of the army (fol.8v). Both French and German monarchies have claimed King Charlemagne as their ancestor.  Claiming Charlemagne for one’s cultural heritage promotes an association with a “Holy Empire” and reaffirms the role of the church and the government. 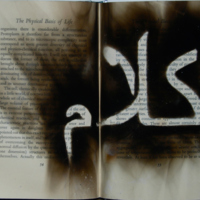 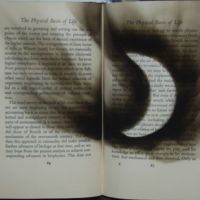 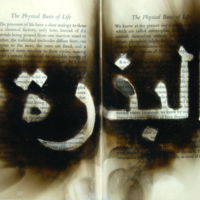 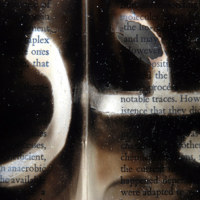 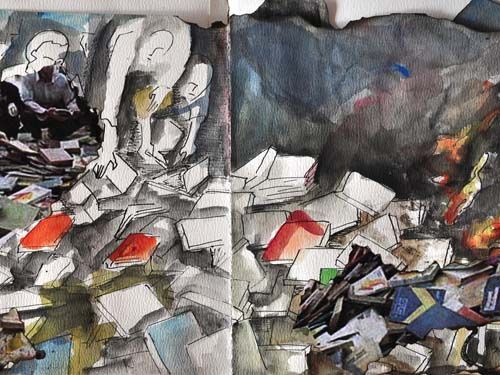 On March 5th 2007, at a bloody midpoint of the Iraq war, a car bomb exploded on al-Mutanabbi Street in Baghdad. The attack tore through the heart of the city’s historic literary district. Thirty people died and 100 were wounded in the blast, for which no group ever claimed responsibility. 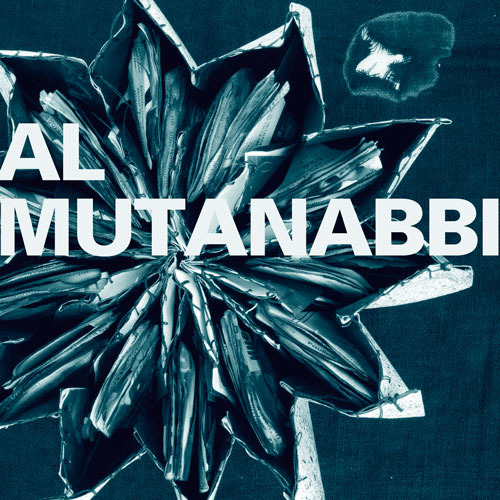 A campaign of the Iraqi government with the efforts of destroying book culture took place in the Summer of 2012. Twice, municipality bulldozer demolition teams accompanied by full armored troops, destroyed the bookstalls of al-Mutanabbi street.  On September 17, 2012 came the last attack of the booksellers of al-Mutanabbi street.  Further reading. 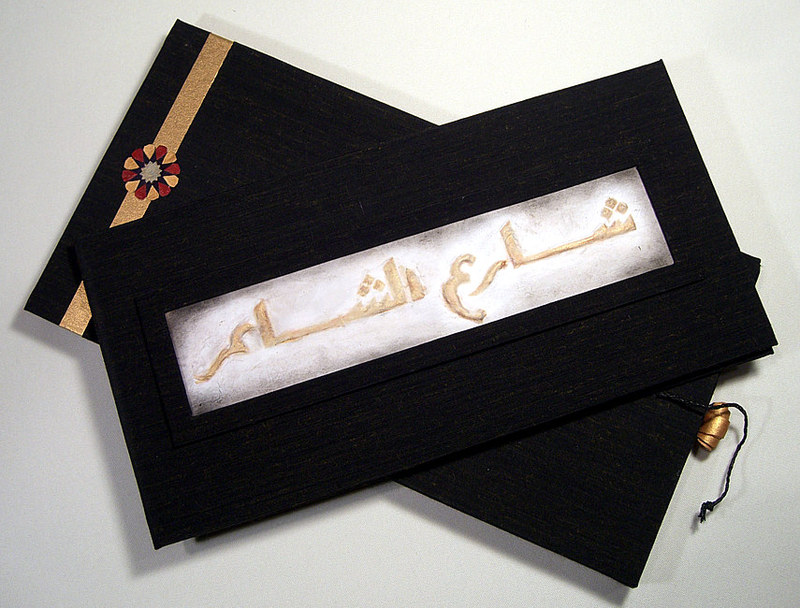 Tania Baban’s artist book The Street of the Poet (2012) commemorates a car bombing that occurred in March 2007, in Baghdad on al-Mutanabbi Street.  The book features a poem by Jim Natal which compares this modern bombing to when the Mongols pillaged the city of Baghdad during the 13th century.  The Street of the Poet is a book which integrates the formal means of its representation.  The edges of some of the pages are slightly burned “to symbolise the fires - ancient and modern - that consumed these irreplaceable books”.  The red, gold, and black marble paper used inside a few of the pages conveys the mixture of blood, and gold and ink from precious manuscripts lost.  The last page in The Street of the Poet features gold Arabic letters intertwined and floating on the page reflecting lines from the source poem: “When books become smoke, the words tend to drift. They crumble into vowels and consonants, letters find the upper atmosphere and jetstream global distances, disrupt flight patterns, cover al-aalam (Arabic for “the world”)”.  Unlike Les Passages d’Outremer there are no explicit visual references to the gore of war featured in the book, rather the words of the poem are suspended in the white abyss of the page.  The burning of books and the killing of people diminishes discussion, and literary and political engagement; this atrocity hides and erases histories and people.  Al-Mutanabbi Street was named after a famous 10th century Iraqi poet.  Many bookstores and coffee shops were in the vicinity of the explosion.  The bombing was an attack on an intellectual Muslim community.  Baban chose to “focus on the irreplaceable vintage volumes and Qurans lost in the blast...The three dimensional Arabic title was made to look like it came from an ancient ruin or frieze…the medallion designs throughout the book are replicated from Koranic verses, but instead of using Arabic words for numerals (as is normal), the artist incorporates the Arabic word “books” into their design”.

Les Passages d'Outremer and The Street of the Poet are visual works that stress the value had of words, their impact, and ability to transcend time and space.  Both the manuscript and artist book incorporate elements from sacred texts.  Les Passages d’Outremer employs 57 historiated initials. Smaller, less detailed, initials alternate red/ gold and blue/ gold.  This color scheme was popular in 13th-15th century France, found commonly in Bibles made during this time (de Hamel).  Rubrication, the highlighting of important information and or the beginning of a passage with red ink, is a medieval technique that occurs in both the Bible and the Qur’an. Les Passages d’Outremer employs rubrication in the text before initials over four lines.  Tania Baban implements rubricated typography to emphasize specific words; “Baghdad,” “red,” “river,” “forever,” “ceremony,” destruction,” “messenger,” “forever,”  “al-Mutanabbi Street,” “bomb,” “books,” “centuries”. 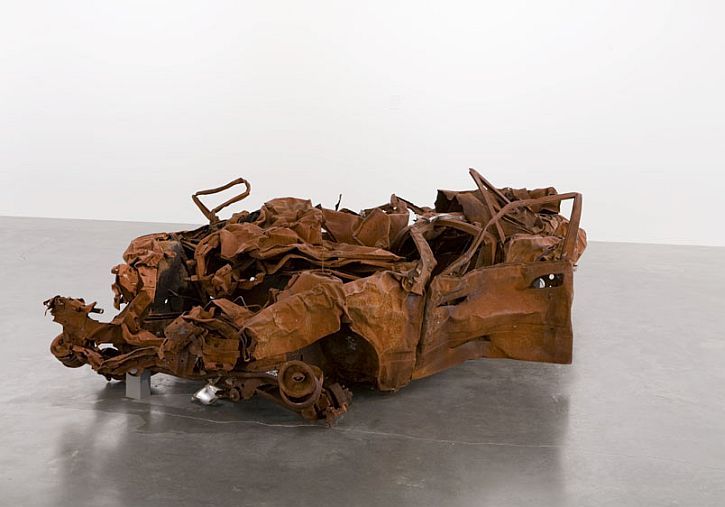 The Street of the Poet is skeptical of the relics of war, “Now, a museum displays a burned-out Iraqi vehicle salvaged from the blast.  It’s unidentifiable except for four door frames and wells for wheels.  People pass with superficial glances, think it, perhaps, abstract sculpture rather than another charred messenger”.  Natal addresses how the material effects and representations of war can be transformed into art, neutralizing or glorifying the harm done to other cultures.  Les Passages d’Outremer is an example of how books have been made as a means of communicating and proposing histories which enable an attachment to land as well as the honoring of a culture’s prominent figures.  The people represented in the full page miniatures are associated with French culture, even if not French, because they are understood to have the same moral values as the French in the 15th c.; the practice of Christianity and a hierarchical society.  The absence and erasure of books and manuscripts is damaging to a culture’s values; one’s claim to a geographical presence is tampered with, and it can dangerously be assumed that a culture had nothing worth mentioning or preserving.  “Blood and ink lost are lost not for good, but forever” (Natal). 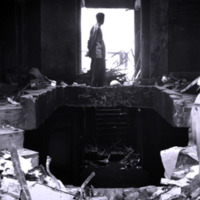 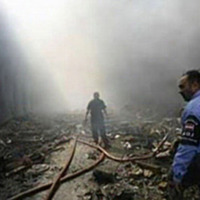 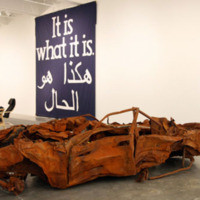 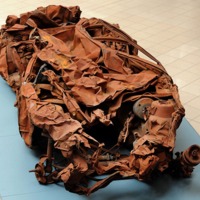