The Counterculture becomes the Love Generation 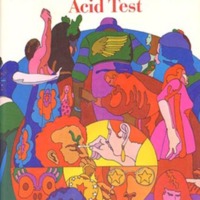 THE ACID TESTS
USHERING IN THE SUMMER OF LOVE

The Acid Tests were a series of parties organized by author Ken Kesey and his band of Merry Pranksters, a collective of artists and musicians who lived communally in La Honda, California. The Acid Tests were characterized by the use of LSD, and the Grateful Dead often performed. These parties took place throughout the mid-1960s, and signified the start of the hippie counterculture in San Francisco. Tom Wolfe narrates the drug-fueled lifestyle of Kesey and the Pranksters as they traveled across the country in his 1968 nonfiction book, The Electric Kool-Aid Acid Test.

“A new concert of human relations being developed within the youthful underground must emerge, become conscious, and be shared so that a revolution of form can be filled with a Renaissance of compassion, awareness and love in the Revelation of the unity of all mankind…. The Human Be-In is the joyful, face-to-face beginning of the new epoch.” -San Francisco Oracle, Vol. 1, Issue 5, p. 2, 1967

The Human Be-In, or the “gathering of the tribes,” occurred in January of 1967 in the Polo Fields of Golden Gate Park, and was attended by an estimated 20,000-30,000 people. Initiating the Summer of Love, the Be-In brought together political radicals from Berkeley, Beats from North Beach, hippies from the Haight, Hells Angels, and curious teenagers to connect through the use of drugs, peaceful anti-war protest, and personal empowerment. The public was invited to bring “costumes, blankets, bells, flags, symbols, drums, beads, feathers and flowers.” Indians represented a pure form of being to hippies and organizers of the event co-opted Native American imagery in a reach for authenticity.