"How Upton Sinclair and EPIC Swept the Democratic Primary 1934" Youtube video by Greg Mitchell. Features Dean McHenry and other speakers. Greg Mitchell is the author of The Campaign of the Century: Upton Sinclair's Race for Governor of California and the Birth of Media Politics 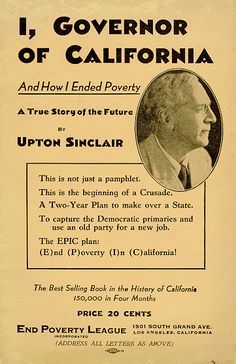 Upton Sinclair was a Socialist American author who wrote nearly 100 books, the most famous of which is The Jungle (1906) which exposed horrendous conditions in the meat-packing industry. Dean McHenry was an avid reader of his novels.

In 1934 Upton Sinclair registered as a Democrat and ran for governor of California. He won the primary by a landslide, but an intense media campaign, which inaugurated the modern media's role in electoral campaigns, contributed to Sinclair's defeat.

In 1934, Clark Kerr and Dean McHenry were young and idealistic UC Berkeley graduate students. Kerr, whose Master's thesis at Stanford University was on self-help cooperatives, invited Dean McHenry to Los Angeles, where he worked as a field agent for a summer helping to establish self-help cooperatives for unemployed people. This was part of EPIC [End Poverty in California].

In the video interview available above McHenry remembered:

"I was in favor of social insurance and in favor of a better tax system than we had in California. (We didn't have an income tax in California at that time.) We were pretty desperate, you know, by mid-1934. There weren't very many signs of recovery and California hadn't changed ppolitically very much, despite the fact that Franklin Roosevelt was president and there was some New Deal legislation that was rolling. But I think a lot of young people are idealistic. I had always been interested in utopias. There even was a Utopian Society at the time which was joined by many, many people. We thought there might be some better society that was possible. And Sinclair raised those hopes a good deal."

When he returned to Berkeley in the fall, McHenry served as Chairman of the Planning Committee for the Northern California Division of the EPIC Young People’s League and helped gather a cadre of key Northern California politicos and thinkers who would advise Sinclair as governor, if he got elected.

Dean McHenry discusses his role in the Upon Sinclair/EPIC Campaign in his oral history conducted by the Regional History Project at the UCSC Library.

"In the 1934 campaign, I had been fairly close to many of the Sinclair people . .  It was the EPIC campaign, and by far the most fascinating campaigns in the history of California probably ever, but at least in my time. . . I was not really an insider in the Sinclair campaign . . . I spoke for the Democratic ticket and advocated Sinclair’s cause in a great assembly in Wheeler Auditorium at Berkeley in the fall of 1934. President Sproul presided, and there was a spokesman for Merriam and a spokesman for a third party candidate called Raymond Haight, and then I spoke for Sinclair on the Democratic ticket. That, so far as I can remember, was the only public appearance I ever made in that campaign..."

For more on the End Poverty in California and Upton Sinclair campaign see:

The Virtual Museum of the City of San Francisco

Greg Mitchell, The Campaign of the Century: Upton Sinclair's Race for Governor of California and the Birth of Media Politics (Random House, 1993).

Remarks on Upton Sinclair: A Lecture by Dean McHenry in May 1984 at UC Santa Cruz. Available at the UCSC Library's Special Collections Department.